For prospective students worried about not getting the grades they expected or securing their first choice of university, PETRONAS Trackside Fluid Engineer Stephanie Travers has some advice: seize the moment.

Stephanie, who graduated with a BEng in Chemical Engineering in 2016, said accepting a position at the University of Bradford was the best decision she ever made. She now works for PETRONAS, the title and technical partner of the Mercedes-AMG PETRONAS F1 team.

“I didn’t get the A-level grades I wanted,” she explains. “Bradford was my reserve choice but after my first year and seeing how much I’d grown and the grades I was getting, it was the best decision I ever made.

Today she travels the world with F1 and works closely with the Mercedes-AMG PETRONAS F1 team, including the drivers, Lewis Hamilton and Valtteri Bottas. Her work is highly specialised and involves analysing samples of the PETRONAS Primax fuel, Syntium oil and Tutela functional fluids that are used to power the car. 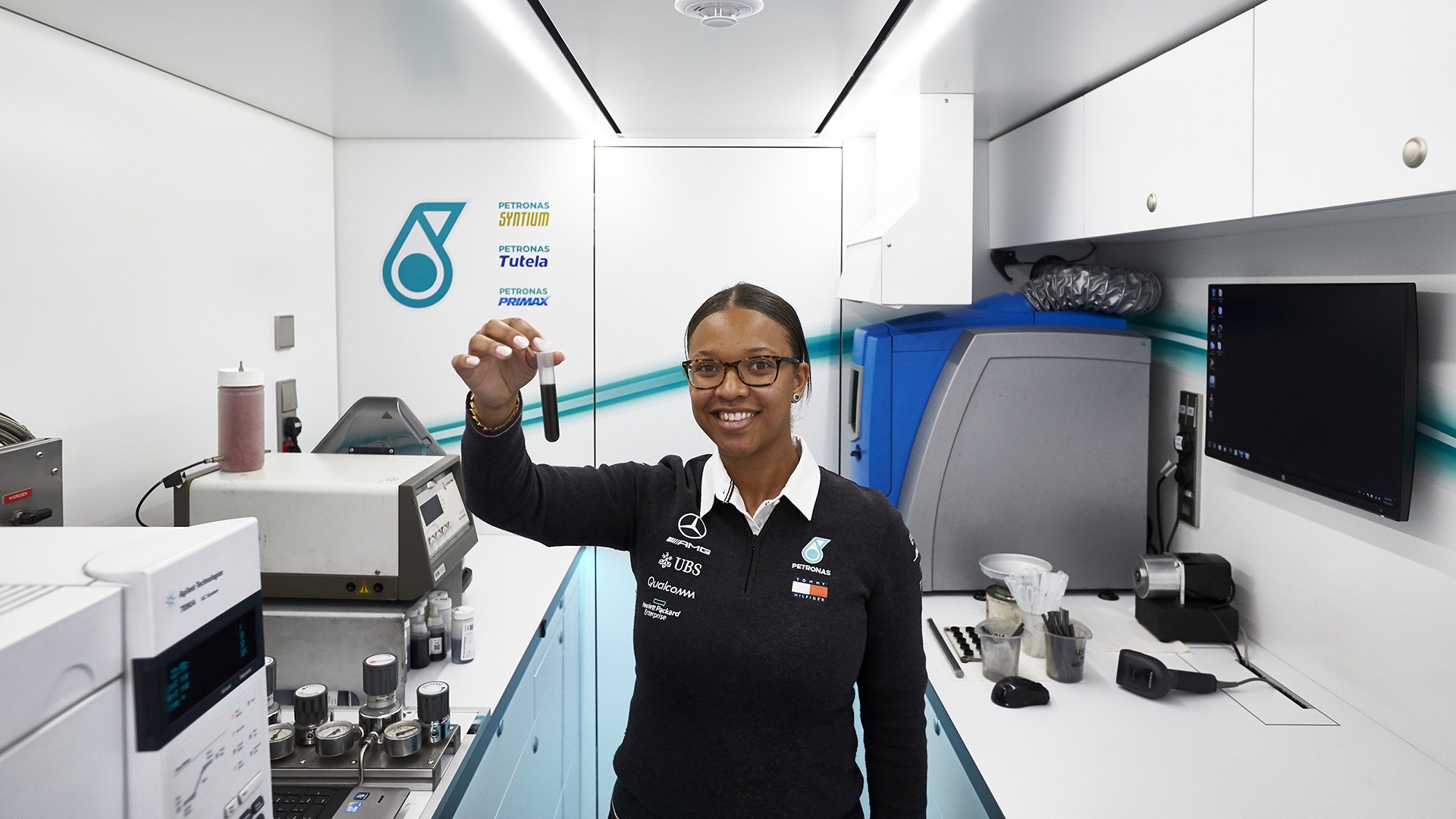 Her analysis not only ensures that fluids comply with the FIA’s regulations but also provides early detection of any potential problems, a key factor in helping the team finish as many races in the best possible position.

Joining F1 was a childhood dream for Stephanie, who recalls getting up at 6am to watch televised races with her family. She cites support provided by the University of Bradford as one of the factors in her success – she secured her present position after being selected from 7,000 applicants in PETRONAS Lubricants International’s global talent search in 2018.

“The facilities at Bradford were phenomenal, as were the lecturers they had from industry. I always had excellent support throughout my degree and beyond. They helped me in so many ways. I remember feeling a little distraught when the Careers department took a red pen to my CV but after I made the corrections they suggested, I received a lot more interest from employers.”

Stephanie, 26, who was born in Zimbabwe and moved to the UK in 2004 to live in Worcester Park, Surrey, recently made history by becoming the first black woman to stand on an F1 podium, collecting the Constructor’s trophy on behalf of Mercedes and PETRONAS alongside drivers Lewis Hamilton and Valtteri Bottas. It’s a moment she hopes will inspire more women to take up engineering. 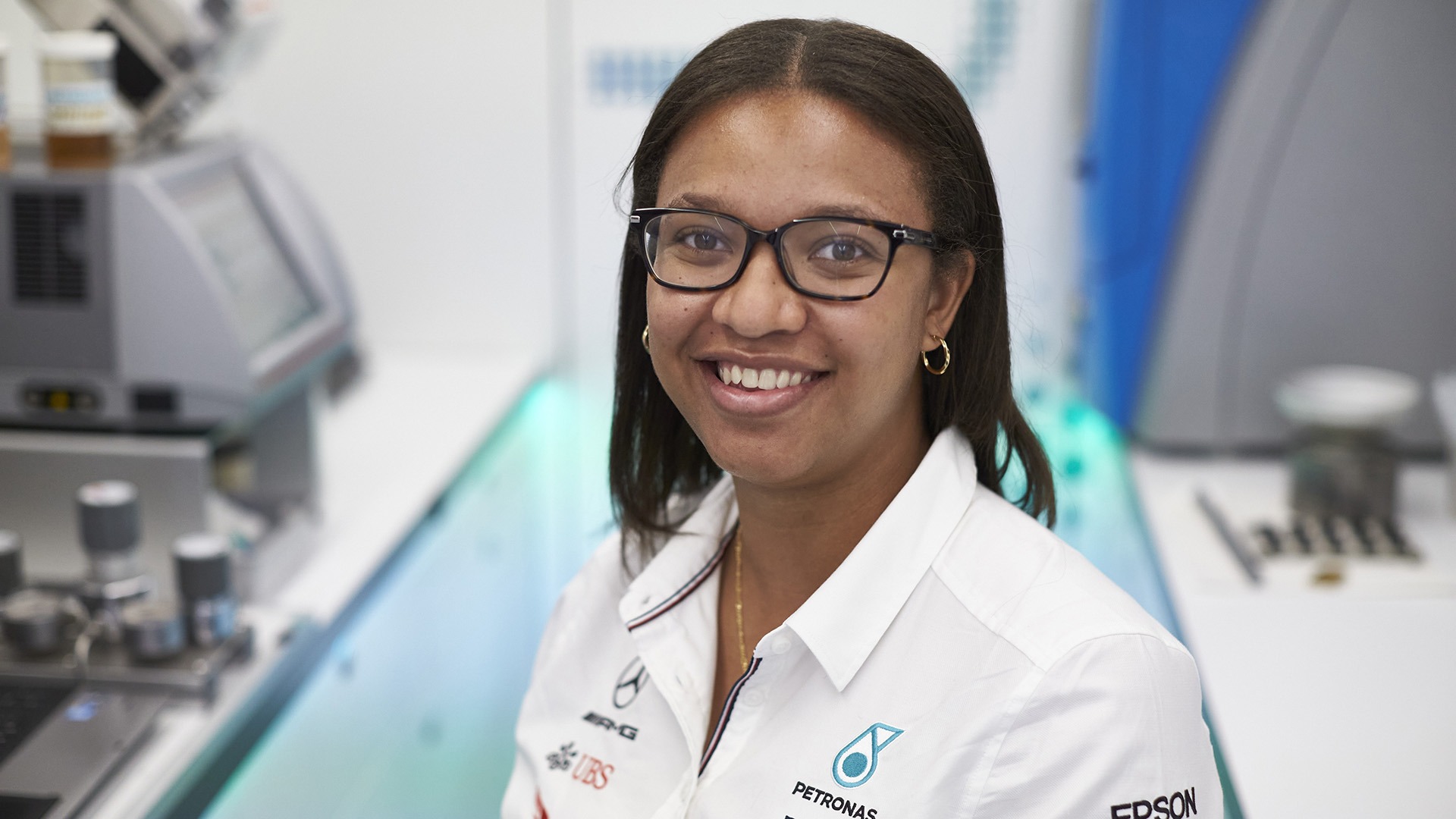 “It’s still a very surreal moment for me. It was a great accomplishment for myself and my family and I feel honoured to be recognised by the Mercedes Team and PETRONAS.

“I never considered myself a role model but the response I’ve had from the public and from young girls who want to go into engineering has been amazing. I’m passionate about encouraging more women to take up engineering because I think it brings diversity of thought and approach. I believe it’s something we need to change by inspiring children from a young age.”

She adds: “Never giving up on your dreams, a negative situation should not bring you down. It’s not the end of the world if you don’t get the A level grades you want. Seeing where I’ve got to through my degree at Bradford and the doors it opened for me, if you’re passionate about something, the world is your oyster.”