Software pioneered by the University of Bradford and used to piece together bone fragments from one of the UK’s oldest archaeological sites could be used on modern crime scenes.

The £1.9m Fragmented Heritage Project at the University of Bradford uses new technologies that enable rapid analysis of artefact fragments. Now it has garnered interest from the Home Office for use in the field of so-called ‘live forensics’.

Most recently, it was used to help piece together various ‘scatters’ of bone and tools at the 480,000-year-old ‘Horse Butchery Site’ at Boxgrove, Sussex – the subject of a new book, The Horse Butchery Site, published by UCL Archaeology South-East’s Spoilheap Publications.

Dr Adrian Evans from the School of Archaeology and Forensic Sciences in the Faculty of Life Sciences at the University of Bradford said: “The Fragmented Heritage Project was centred around the development of new technologies that enable rapid analysis of artefact fragments and ‘scatters’ that will then be automatically reconstructed using new computer software. This will allow analysis of sites and artefacts on an unprecedented scale and will lead to a better understanding of prehistoric behaviour and human evolution.

“Being able to contribute to the understanding of activities at such an important site is very exciting. Boxgrove represents a unique window into activities happening half a million years ago in the UK. Our project and its technology has allowed further information to be prised out of this invaluable site that we would not otherwise have. This extends beyond finding further evidence of activities but also providing new ways to visualise the artefacts using 3D scanning and 3D printing.” 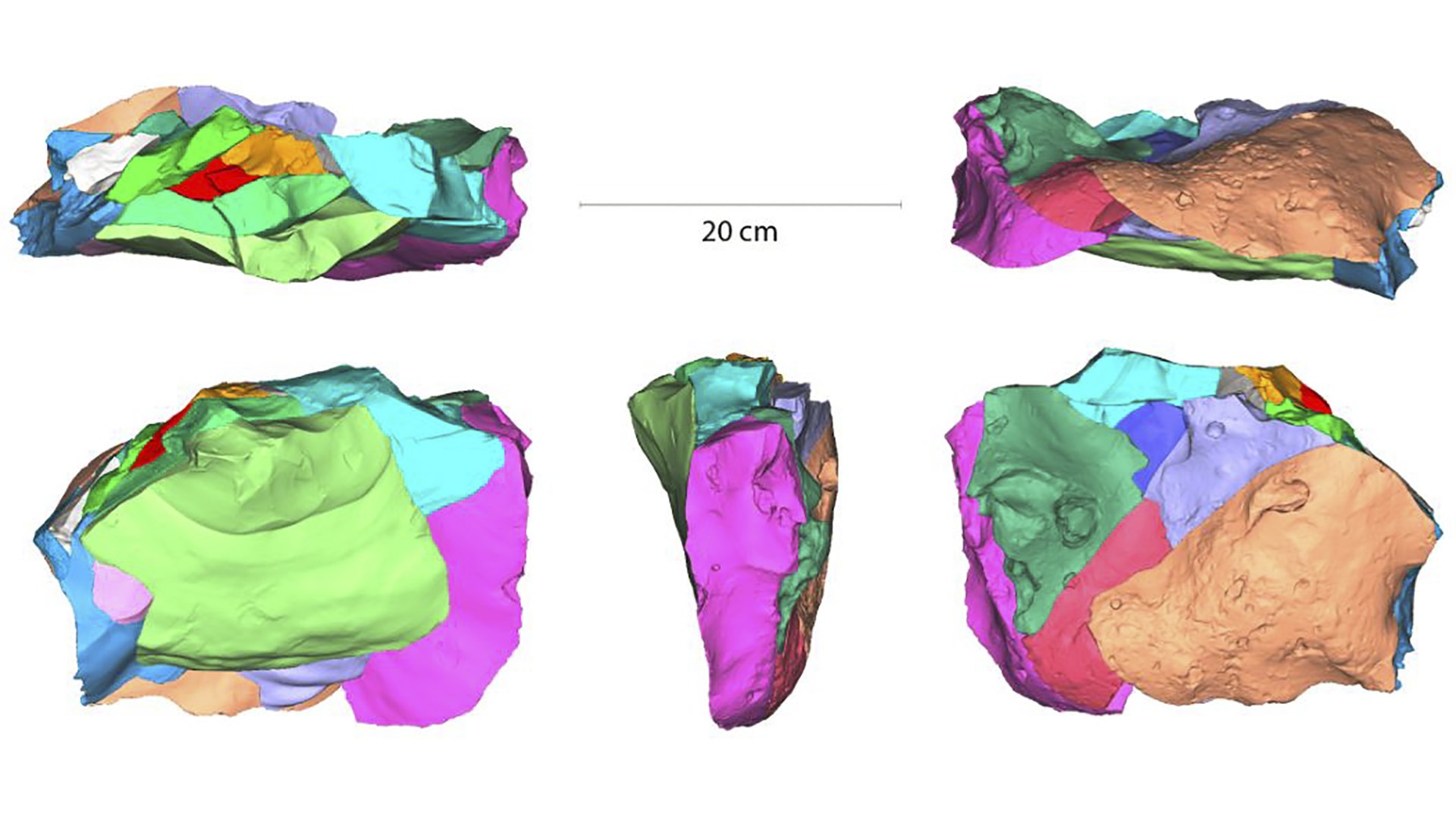 The Home Office’s science wing – now integrated within the Defence Science and Technology Laboratory – has expressed an interest in the technology, saying it could be used with the rapid collection of evidence from crime scenes and even forensic pathology.

A letter of interest from the Home Office says: “There would be clear benefits from a valid and reliable digital solution that could be employed ‘real time’ in order that investigators could have such useful information in a matter of hours rather than weeks. It is believed that the research being undertaken in ‘Fragmented Heritage’ to scan and refit artefact surfaces has the potential of being applied to the ‘physical fit’ process within forensic investigation.”

The team at Bradford received £1.9m in funding from the Arts and Humanities Research Council to study ‘Fragmented Heritage’ – the project was led by Professor Andrew Wilson, Dr Adrian Evans, and Professor Hassan Ugail at the University of Bradford, with Nick Ashton from the British Museum.

The Horse Butchery Site is one of many excavated in quarries near Boxgrove, Sussex, an internationally significant area –owned and managed by English Heritage – that is home to Britain’s oldest human remains. The site was one of many excavated at Boxgrove in the 1980s and 90s by the UCL Institute of Archaeology under the direction of Mark Roberts. 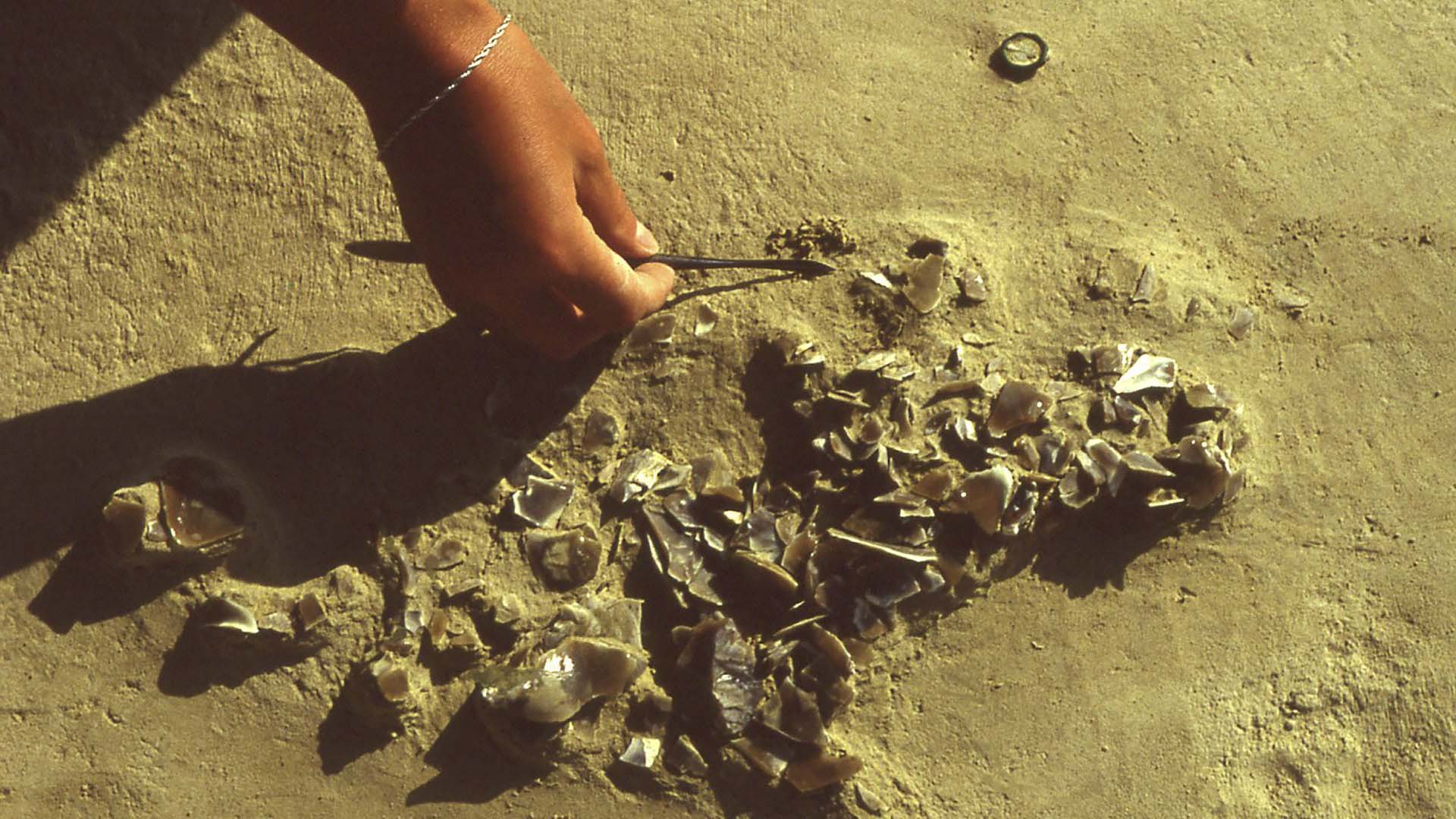 In the course of excavating the site over 2,000 razor sharp flint fragments were recovered from eight separate groupings, known as ‘knapping scatters’. These are places where individual early humans knelt to make their tools and left behind a dense concentration of material between their knees.

Detailed study of the horse bones shows the animal was not just stripped of meat, but each bone was broken down using stone hammers so that the marrow and liquid grease could be sucked out. The horse appears to have been completely processed, with the fat, marrow, internal organs and even the partially digested stomach contents providing a nutritious meal for the early human group of 30 or 40 individuals.